Kendig’s first definition takes the prize for intuitiveness. I’ll build up to it, starting with one of the easiest examples, rising circles:

These are given by the equations

. Going left to right, we have two distinct real points, merging into an intersection of multiplicity 2, then splitting apart into two imaginary points.

A third example: the cubics

, with c>0, c=0, c<0. I won’t bother to draw the diagram, but here’s a description: three cubics, all with the shape of the middle cubic in the figure above, with y-intercepts below, at, and above the origin, respectively. (I call this “rising cubics”.) Here the roots are

, where ω is a primitive cube root of unity. So one real and two imaginary roots, except when c=0, when all three roots coincide.

The pattern is clear: multiple points split up when we “perturb” things a little. Before the perturbation, one point with multiplicity k; afterwards, k distinct points. Let’s use this as an informal definition of multiplicity, and see how it works out with our running example of Fulton’s E and F. Here’s E:

If we translate E up a little, or the x-axis down (y=c, c<0), we get four real intersections; translating the other way gives two real and two pure imaginary, as we saw in the last post. (Translating the x-axis is easier algebraically.) So our informal definition says the intersection of E and the x-axis at the origin O has multiplicity 4. This agrees with Bézout’s theorem for a quartic and the linear equation y=0.

It’s a similar story for F:

A sextic and y=0 ought to have six intersections. Translating the x-axis a little gives us six distinct intersections, two of them with pure imaginary x, as we saw last time. So the origin is an intersection with multiplicity 6. 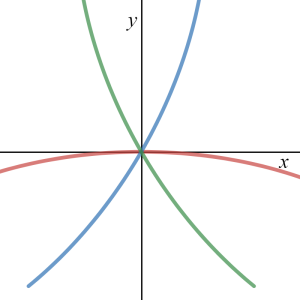 As you can see using the informal definition, the red “horizontal” branch has a double intersection with the x-axis, while the other two branches have simple intersections. Terminology: curves intersect transversally at a point when they are not tangent there. (As is the case with the non-horizontal branches and the x-axis.) Altogether we have E intersecting the x-axis with multiplicity 4, as it should.

Now we’d like to replace this informal perturbation definition with something more formal and algebraic. I’ll leave full details to Kendig (§3.2–§3.8)—lots of i’s to dot and t’s to cross. But if you’re willing not to sweat the small stuff, I can sketch the key ideas, and explain how they apply to Fulton’s E and F.

For the moment, let E and F be any two polynomials whose curves intersect at the origin O. Quick reminder: I like to overload the letters E and F, using them for both polynomials and associated curves. More overloading coming up soon.

New idea: think of F as a level curve of a polynomial function F(x,y). Imagine a moving point

, traversing a branch of the curve E and passing through O at t=0. Consider the function

(overloading F). If F(t) can be expanded in a power series

, then we must have

is the origin and F(0,0)=0 by our assumptions. If the branch of E crosses F transversally at O, then you’d expect F(t) to be roughly linear in t near 0. That is, we should have

for a transversal intersection.

This picture illustrates the idea:

The rising circle and rising cubic examples furnish another idea. Let F(x,y)=y. If E is the circle with c=1 (a double intersection), then

is the branch tangent to the x-axis. For the moving point, use

. With the cubics, let c=0 (triple intersection), and let

be the moving point. So

Building on this, we can define the total multiplicity at any intersection point of two curves:

This is, essentially, Kendig’s first definition of multiplicity (§3.6). Terminology: the order of a power series is the degree of its smallest nonzero term.

(I should mention one niggle; I won’t really address it until much later. You could artificially inflate the multiplicity by replacing t with a power of t. That is, replace the parametrization

. Then F(tr) will have r times the order of F(t). Kendig brings up related issues in §3.3. For now, just assume that t is chosen to make the order of the power series “as small as possible”. I won’t repeat this caveat until I’m ready to confront it for real.)

OK, we now reinstate E and F as Fulton’s two curves. Fulton doesn’t tell you this, but E and F are roses with simple equations in polar coordinates:

, this furnishes parametrizations for the branches with t near 0. These are “horizontal” branches, tangent to the x-axis. Keeping only the lowest order terms:

So these branches intersect the x-axis with multiplicity 2. Plugging

Let’s see how this agrees with the “perturbation” definition. We appeal to the level curve idea: look for intersections of the E branch with a nearby level curve of F. First we look for solutions to

. These should be given, approximately, by the equation

, with six distinct solutions. Next we plug these six values of t into the parametrization

The other branches of E through the origin come from values of t near π/3 and 2π/3.  Exercise for the ambitious: use this to compute some more branch multiplicities. Likewise, you can try switching the roles of E and F.

Changing the level of the level curve is one way to perturb an intersection. How about other methods? Here’s a plausibility argument for a more general result. Suppose a branch of a curve E crosses a curve F with multiplicity k. So

. Say now that we make any kind of small change to E, or to F, or to both. If the change is small enough, it should change the coefficients of F(t) only slightly, say to

Assume that’s a convergent power series for G(t). So if t is sufficiently small, all terms past

Not even close to a rigorous argument. But suggestive nonetheless.

To conclude this post, here are pictures of a branch of F intersecting a level curve E(x,y)=ϵ, with ϵ>0 on the left and ϵ<0 on the right. There are four intersections, all distinct. On the left, two are real and two imaginary; on the right, all four are imaginary.

When I gaze at the left side of this figure, I picture an island with three hills, meeting at a lower elevation in the middle.
E(x,y) is the elevation at (x,y); sea level is z=ϵ<0. The red curve is the coastline. Let the sea level rise. When z=0,
the water submerges the middle except for one point. As sea level rises to z=ϵ>0, the hills separate into three islands: the right hand side of the figure. Now in that right hand side, imagine pushing the F branch down a bit, till it intersects the two bottom red lobes in four distinct points. Those are four real intersections of E and F. These will merge into two real intersections as we slowly move the F branch back up, then disappear entirely. It’s easy (and correct) to believe that the intersections have all become imaginary and distinct, especially remembering the example of the rising circles.