I’ve decided to learn algebraic geometry. Or at least more algebraic geometry—I’m not starting from zero. But I’m still sampling the appetizers; I’m using Fulton’s Algebraic Curves and Kendig’s A Guide to Plane Algebraic Curves as my initial texts. Eventually I’d like to understand schemes, but that’s dessert; I plan on making a long, leisurely meal of it, with plenty of time savoring examples and history, and chewing proofs to extract all the flavor. (Can you tell I’m writing this before lunch?)

Kendig starts chapter 2 by asking, “Where are the nice theorems?” He has in mind Bézout’s Theorem: if E and F are curves of degree m and n, then they intersect in mn points (kind of).

Bézout’s theorem has the right ring to it—it ought to be true, you’ll agree? If E and F don’t share a component, then the number of intersections is at most the product of the degrees. Newton gets the credit for this observation, according to Wikipedia. Here’s the relevant passage from the proof of Lemma 28 in Book I, §6:

Bézout’s version (according to the MacTutor archive):

The degree of the final equation resulting from any number of complete equations in the same number of unknowns, and of any degrees, is equal to the product of the degrees of the equations.

I said the number of intersections was kind of the product of the degrees. Why “kind of”? Here’s an example. Look at these two curves in Fulton (p.32): 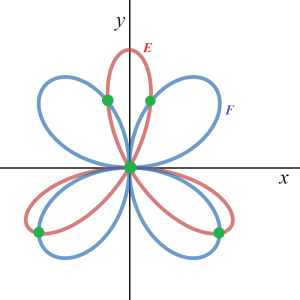 of degree 4 and 6. So we ought to see 24 intersections (green dots), instead of just 5! (Note that Bézout didn’t talk about the number of intersections, just the degree of a derived equation.)

Intersections can hide in three ways: (a) in the complex plane; (b) at infinity; (c) on top of one another. This example illustrates all three.

The green dot at the origin represents 14 points. (That’s not supposed to be obvious!) In other words, we have to count intersections with multiplicity. (I’ll try to give some intuition for the 14 in Post 3; Fulton calculates it on p.40.) So this brings our total of visible intersections up to 18.

Six points still missing. They lie at infinity in the projective plane, with imaginary coordinates. (Again, not obvious.) We can make them visible by transforming the equations for E and F. We can (so to speak) change our viewing window to move the line at infinity to the x-axis, and also to show the ix-axis instead of the x-axis. (See the next post for how that works.) The transformed curves look like this: 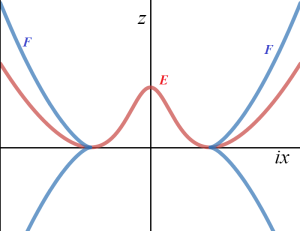 There at i and –i, on the line at infinity, we see two more intersections. But really that’s the full six missing points: each intersection has multiplicity 3. (Once more, details in future posts.)

I’ll dispose of complex coordinates and the projective plane in the next post. But multiplicity is what I really want to chew over—that’ll take a few posts.