A Fragment From the Archives 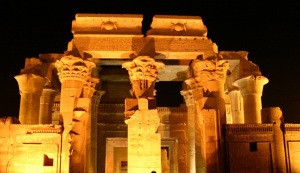 Now the people of Atlantis worshiped nine gods, but they had only three temples. These they had spaced equally around the rim of an enormous circular bed of glassy black stone in the center of the island. Wondrous works of architecture were these temples: one tall and spindly, and of gleaming smooth marble; one golden, and of soft curves and sinuous contours that reflected the sun in bright serpentine patterns; and one of intricately cut crystal, here flat, here in a thousand facets, so that the eye was dazzled by swirling fragments of color, or lost in deep pools of light.

This was the custom of the land: for three tolod, the Atlantans worshiped the gods Avas, Kotar, and Síen, each god choosing one temple to himself. (One tolod = 9 days.) But when 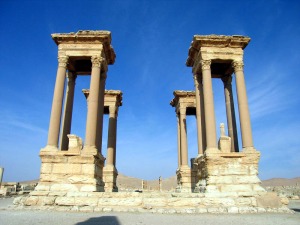 Long the gods endured this, for the Atlantans were generous with their sacrifices. Still, the gods smarted under the tauntings of foreign deities. “Six tolod of fasting! Is it not the mortals who should fast at the will of the gods?”

So at length the gods of Atlantis grew weary of this raillery, and wearier still of six dry tolod, and found themselves dreading the end of their brief space of adulation even as it began. Thus one day spoke Avas to his priests: “Harken to my will, and to the will of all your gods! Nine tolod hence let there be nine temples, spaced with perfect evenness round the rim of the great stone—for no temple may have greater dominion than another. And let them be equal among themselves even as they surpass all other temples of the world. Such is our will: see that you obey!” So, too, spoke Kotar to his priests, and Síen to hers. And all the priests of Atlantis trembled and replied, “It shall be done, O gods!”

Now the people of Atlantis numbered among themselves the greatest artists, engineers, architects, and stonemasons that the world had ever seen. Also among them were many mathematicians. And all set busily to work when they heard the priests pronouncement: the stonemasons to quarrying, the engineers to building great engines of lifting and hauling, the artists to painting and scupting, and the architects to planning the form and construction of the new temples. All the populace found needful work for the fulfillment of the gods’ command.

But the mathematicians said, “Now this is a very interesting problem. It is necessary (and sufficient) to trisect each of 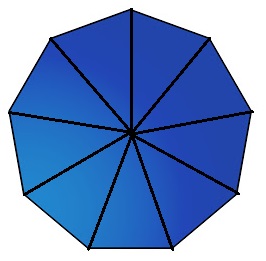 the angles that separate the old temples from one another, viewing them from the center of the Great Stone, then to place one new temple on each of the trisecting lines.” And they busied themselves with their instruments, and drew many pictures in the sand, and consumed much wine and ablakhar in thinking on the problem.

The work proceeded apace. Soon the Great Stone grew cluttered with machines the engineers had gathered, and the air became thick with dust from the stones the masons dressed.

So it was when Vabas, Selon, and Ģitan came down. These gods inquired of their priests, who replied that the engineers and stonemasons were ready to build, and waited only for the architects to finish their plans and the mathematicians to mark the new sites. And the gods were satisfied, for a time.

Three tolod passed. The Great Stone was littered with hundreds of sculptures and frescoes. The architects exulted in their finished plans, knowing that whosoever should stand on the Great Stone gazing on the nine temples would perish from excess of splendor, and not regret it.

So the priests increased the offerings threefold, and then ninefold, and reminded the gods how well they had been served for uncounted millenia, and chanted of the glory of the new temples, and altogether somehow managed to keep the nine gods mollified for three, nine, and at last twenty-seven tolod more. And they questioned (nine thousand times) the mathematicians, who kept their fingers so busy in the sand that the shores of Atlantis resembled fields plowed by drunken oxen. But they received no other answer than, “Any day now!”

So at length the nine gods came down together—something never before or since seen, except perhaps at the creation. And the priests quailed before them, but said only: “O gods, we burn to do your bidding, but we know not how to trisect the angle!”

“Then we will show you,” replied the nine gods as one.

Nine crevices appeared in the smooth floor of the plaza: nine cracks that met in the center of the Great Stone and streamed out to the rim, past the rim to the shores, descending deep into the rock.

And Atlantis split in nine parts and sank beneath the waves.

The fragment does not mention what method the gods used to trisect the angle.