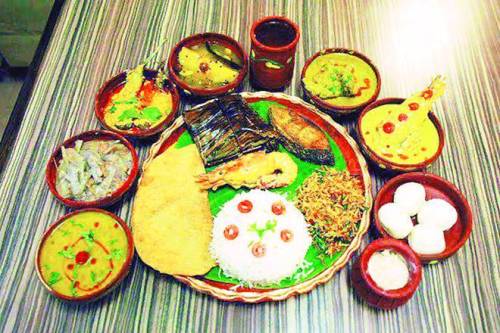 The Migrant’s Table studies the lives of West Bengali immigrants, primarily through the lens of food. The book is the author’s Ph.D. thesis, but the subject holds a special poignancy for him as a West Bengali immigrant himself. As he says in the concluding chapter, “Finding a home 10,000 miles away from home is disorienting, but through food we hope not to lose the East.”

West Bengal is situated in the northeastern corner of India, just west of Bangladesh, part of the Bengal delta, a

floodplain emptying into the Bay of Bengal. Its largest city is Calcutta. Approximately 30,000 West Bengalis immigrated to the U.S. in the period 1970–1980; this is the group Krishnendu Ray focuses upon. Because of U.S. immigration law, this population displays unusual homogeneity of class and caste, with an average income of about $100,000, and a very high proportion of professionals with master’s degree or above.

The author lists five sources of information for his thesis: (a) a sociological survey he conducted, garnering 126 household responses representing 436 individuals; (b) an ethnography he conducted of three households over three summers; (c) a synthesis of the secondary literature; (d) his own experience; (e) a 1972 study, conducted by the U.S. Agency for International Development, of food habits in Calcutta. Since most West Bengali immigrants to the U.S. are from Calcutta, this provided the author with a baseline to study the changes that immigration brought.

A word about the tone of the book. The author was originally Marxist, until martial law in Poland and the Soviet invasion of Afghanistan led him to reconsider. Every now and then he descends into jargon, throwing around words like “hegemony”, “metropole”, and “valorize”, and alluding to postmodernist theory. But the real strength of the book, for me, was the wealth of anecdotes, quotations, and sketches of Bengali culture.

The Mexican poet Octavio Paz was ambassador to India for nearly a decade; he wrote, “In European cooking, the order of the dishes is quite precise … A radical difference: in India, the various dishes come together on a single large plate. Neither a succession nor a parade, but a conglomeration and superimposition of things and tastes … A fusion of flavors, a fusion of times.” Another Paz quote sums up a conflict for all U.S. immigrants: “[the U.S. was founded] on the notion of creating a common future. To be an American is to turn one’s past into a quaint holdover while focusing almost exclusively on the future. In the U.S. the past of each of its ethnic groups is a private matter, the country itself has no past.”

The tension between “being American” and “being Bengali” runs like a sharp, piquant spice note throughout the book. Many Bengali-American households allot breakfast and lunch to the new world, dinner to the old. Breakfast is usually toast or cereal; curiously, Ray writes, “very few Bengalis appear to choose the closest to the Calcuttan favorite—Rice Crispies. Instead, cornflakes are the most popular cereal among Bengali Americans. An element of prestige and association with modernity comes with the alien corn and its industrially extruded flakes.”

In contrast, dinner has taken on the role of preserving Bengali culture, often with some trouble. Bengalis traditionally eat whole fish with rice. Ray writes:

[The fish] is difficult to carve in the preferred way using a handheld knife; a special kind of Bengali cutting implement called a bonti is required. The bonti cannot be used without squatting on the floor … For some Bengalis, the transition from the floor to the countertop is less a sign of willing Americanization than a grudging reorientation to a new domestic architecture. Others are willing to sacrifice a little in taste for the convenience of countertop slicing and dicing.

Every major Vedic ritual … is a sacrifice that includes cooked food offerings… Every sacrificial operation employs a derivative of one of the roots signifying ‘cook’. … In cremation, the body is “cooked” for the gods…. [The marriage ritual includes] smearing of tumeric on the bride and the groom…

Ray describes sacred diagrams drawn with rice powder, as protective charms for marriage or the birth of a son. He details the layout of Bengali gardens, with chilies and the sacred basil at the center. For many Bengali Americans, he writes, the kitchen garden “produce[s] a home in a land that is not yours.”

One last quote from a Bengali-American author:

Immigrants carry the bruises, and often the scars, from missed signals and misread signs. They’ve traded their certain place (sometimes humble, sometimes exalted) in a fixed society for a crazy chance at something elusive called personal happiness. I don’t say they’ll find it; it’s enough that they try.