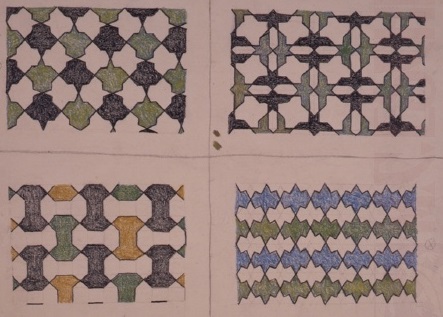 I first learned as a kid that “there are only 17 basically different wallpapers” from W.W.Sawyer’s Prelude to Mathematics. (The quote appears on p.102. Aside: this remains an excellent gift for a youngster with a yen for math.) I remember my father pointing out the absurdity of this claim: are all mural wallpapers of van Gogh’s paintings basically the same?

The sense in which different wallpaper patterns are “basically the same” turns out to be rather subtle. The classification theorem belongs to the theory of crystallographic groups, a topic beautiful in its own right, but enhanced by its connections with physics and decorative art. (Everybody always mentions the Alhambra and Escher’s drawings. An article by the mathematician George Pólya set Escher on his road to tessellations.) You’ll find nice treatments of some of the math in Artin’s Algebra and Sternberg’s Group Theory and Physics. Sternberg also briefly sketches the history, starting with Steno’s De solido intra solidum naturaliter contento dissertationis prodromus (Preliminary discourse to a dissertation on a solid body naturally contained within a solid—they knew how to title things in those days!) Stephen Jay Gould wove Steno’s work into the thought-tapestry that is his book Time’s Arrow, though as I recall he didn’t get into the group theory.

Nowadays you can find scads and scads of websites devoted to the wallpaper groups. I’ll just mention two older expository articles: The Plane Symmetry Groups: Their Recognition and Notation, by Doris Schattschneider, and Crystallography and Cohomology of Groups, by Howard Hiller, which won an MAA Writing Award.

The wallpaper groups illustrate group cohomology, as you’d guess from Hiller’s title.  I’d say they offer one of the best illustrations, along with carrying in grade-school arithmetic. (I learned about that from a newsgroup post by James Dolan; here’s an article explaining the connection.) A page by David Corfield lists 10 sources of intuitions about cohomology, but he omits the wallpaper groups.

I wrote up my own notes on the wallpaper groups in 2011; here they are.

One response to “Wallpaper Groups”