[This post is available in pdf format, sized for small and medium screens.]

Lewis Carroll Epstein wrote a book Relativity Visualized. It’s been called “the gold nugget of relativity books”. I wouldn’t go quite that far, but Epstein has devised a completely new way to explain relativity. The key concept: the Epstein diagram. (I should mention that Relativity Visualized is a pop-sci treatment.)

Here’s how Epstein introduces his idea:

This is both poetic and (I feel) unnecessarily mystifying. Let me quickly add: Epstein does not want you to take this literally. It appears in a chapter titled “The Myth”, where Epstein advocates for “myths”—I’d call them analogies—to help us grasp the basic concepts of physics. You can’t argue with that. (Well you can, but you shouldn’t.)

I’ll undertake demystification in a moment. But first, here’s the prototypical Epstein diagram: 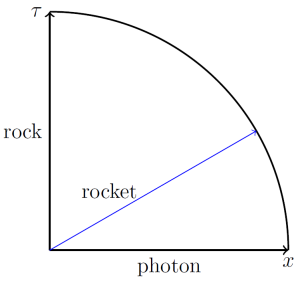 As with Minkowski diagrams, we ask two spatial dimensions to leave the room so we can draw things on a 2D screen. Note that the vertical axis is labeled τ, for proper time. In a Minkowski diagram, this would be labeled t of course.

The rock, the rocket, and the photon all enjoy a mythical speed of 1 (setting c=1, as usual). Our rock sits still (in the lab frame, let’s say). So its mythical speed consists entirely of motion through time. The photon travels through space as fast as possible, with nothing left over for motion through time. Its elapsed proper time is zero. The rocket devotes some mythical speed to spatial motion, some to temporal motion. I’ve illustrated the case where dx/dt=√3/2, so in one coordinate second it covers approximately 0.87 light-seconds of distance and 1/2 second of proper time.

OK, what’s really going on? Start with the Minkowski metric

Hey, that looks just like the Pythagorean formula! Can we banish the strange non-euclidean features of Minkowski space, and revert to good old high-school geometry?

Of course not. There’s a fly in the ointment. Unlike dt and dx, dτ is not an exact differential, so you can’t use (τ,x) as a coordinate system for spacetime. Not if you want a 1–1 correspondence between events and coordinate pairs. You can use τ as a coordinate along one worldline, however (provided the particle keeps below the speed of light).

Think of Epstein diagrams as a graphical calculation technique. Say we have the worldline of a particle

So long as the particle obeys the speed limit, τ is a strictly increasing function of t. That means you can also give the particle’s position as a function of its proper time:

The graph of g is the Epstein diagram. Since dt2 = dτ2+dx2, the (ordinary euclidean) length of the curve is the elapsed coordinate time.

For example, look at this diagram, illustrating the twin paradox:

With our familiar Minkowski diagram, we have points E1 and E2 for the events “twins bid each other farewell” and “twins joyfully reunite”. The elapsed time for the stay-at-home twin Terrence is longer than for his adventurous sister Stella, even though it’s shorter in the diagram.

In the Epstein diagram, we draw curves for gTerrence and gStella, starting at the same point. Both curves have the same length, representing the coordinate time between E1 and E2. As you can clearly see, Stella ages less between E1 and E2 than Terrence.

I fear this demystification might undersell the charms of Relativity Visualized. Epstein exploits his diagrams to the hilt when he gets to General Relativity. I particularly like his explanation of the Shapiro time delay.

Epstein has other arrows in his quiver: a fluid writing style, a gift for analogy, and artistic talent (he drew all the illustrations). I award this book the Silver, if not the Gold.